The web magazine Catallaxy (Katalaksija) is dedicated to studying and promotion of the ideas of classical liberalism in the spheres of politics, economy and culture. Its primary orientation is theoretical, although it treats daily politics issues and relevant economic analyses, too.

Catallaxy is a pioneering magazine of this kind in Serbia and ex-Yugoslav region. It was established in 2003, but the first version emerged at the beginning of 2004.

The web magazine Catallaxy became the official media of the Liberal Center Katalaksija in 2006. 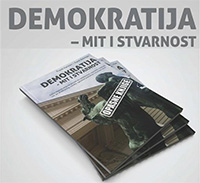