A Public debate on the results of a decade-long transition in Serbia was held in Belgrade Media Center on March 31st, 2010. The debate was organized by the Liberal Center Katalaksija, the International Republican Institute and the Network of Political Responsibility. Participants in the debate were Aleksandar Novaković and Andrej Stanimirović from the Liberal Center Katalaksija, Miroslav Prokopijević from the Free Market Center and Zoran Živković, the Prime Minister of Serbia in 2003 – 2004. 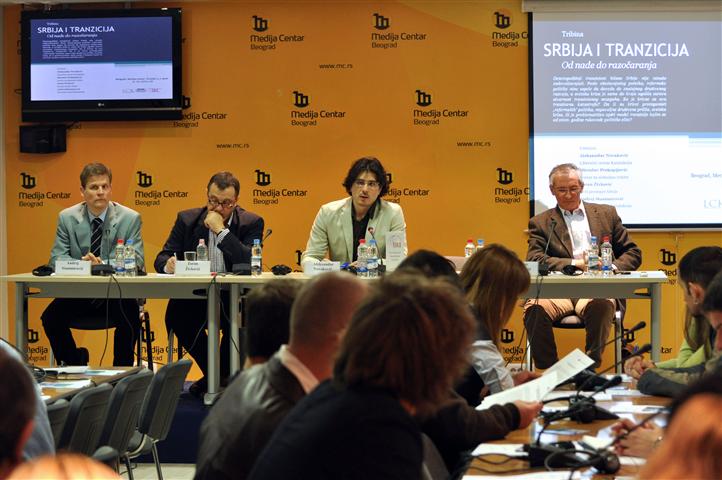 The participants evaluated the outcome of ten-year transition in Serbia as far from satisfactory. After a promising start, the reform policies have failed to bring about significant social development. Global economic crisis has only revealed the harsh reality of transition failure. Although Serbia today is politically free country with free and fair elections and multiparty system, no significant change or improvement was made in the sphere of economic transformation. Participants’ opinion is that economic liberalization (the separation of the economy from the state) is decisive for the success of the Serbian transition to a free society. It is also a necessary condition for of long-term stability and development of Serbia.

As it is highlighted in the debate, the main reason for such unsatisfactory transitional performance – apart from political obstacles and huge unsettled institutional issues –lies in orientation of new political elite toward implementation of general welfare state model, which is a new-fashioned modern, politically correct name for democratic socialism. Instead of implementing fast and far-reaching structural reforms, a painless transition from one system to the other was attempted. However, painless policy turned out to be extremely painful. Whether authoritarian or democratic, socialism is a condemnation of society to stagnation. It is possible to push this fact under the carpet only for a short time. The favorable economic climate in the world, inflows of foreign donations, international aid and foreign loans can delay the inevitable confrontation with reality for a short while. Eventually, the living standards decline, investments dry up, the central bank’s monetary policy suffers a setback.

A bright future and the status of „Balkan tiger“ had once been predicted for Serbia. The beginning of its economic reforms was compared to those of Romania and Bulgaria, but almost a decade later, Serbia is far from being an economically powerful country. It is now often classified along with Bosnia and Herzegovina or Albania on the scale of economic development. The reasons are numerous, but the most important is certainly the lack of real reforms.

Miroslav Prokopijević from the Free Market Center diagnosed that Serbian economy lacks October 6th i.e. urgent institutional reform: “The reforms haven’t even begun. We are still wasting time. What will happen in the future is a slow decrease in income, while the IMF helps or the sale of state property continues. Later, the fall of income will be greater. Large-scale emigration of labor force will occur, especially younger people, qualified, enterprizing and willing to take risk. “

Although the transition from authoritarian regime to a democratic order in Serbia is considered successful, changes in the political field are not followed by those in the economy, which is why liberal economists often call for immediate and comprehensive market reforms, as well as the rule of law. In order to implement the economic transition, according to Mr. Zoran Živković, a former Prime Minister of Serbia, the key is where Serbia got stuck on many major issues – the achievement of political unity: “There will be no majority in favor of the transition, even today. The present government of Serbia knows very well what needs to be done. But the problem is that knowing what needs to be done leads to the conclusion that the one who carries it out will be unpopular. And that’s true. The better the transition is carried out, the more severe defeat will follow in the next elections. But that is a reformer’s historical role.”

As for the continuation of the reform, the sale of state-owned companies is a priority. “The political elite of Serbia seems disoriented with regard to economic transition. One wonders whether they are either dismantling socialism, re-building it, or trying to preserve it somehow. An example of this is the privatization of Telekom, 20 percent of which have been sold previously, now 40 percent may be put on sale, or maybe not … Generally speaking, a slow and partial privatization is attempted, in which the state apparatus tries to keep the key assets under control.,  says Andrej Stanimirović.

Relatively high standard of living in Serbia is due to foreign loans, manipulations of the national currency and unrealistic exchange rate. Predictions are that in four or five years, when privatization is completed, the standard of the citizens will be on the level of productivity – very low. Time will tell how long the current concept of the reform toward welfare state will survive. However, Aleksandar Novaković predicts it could take a while: “It is a concept that still largely retains its influence on politics. As long as the economy of Serbia is not freed from political influence by liberalization, we will make no further progress.”

The general message of the debate is: Serbian model of transition needs to be radically changed. Transition formula should be: Restitution, Deregulation, Privatization – Now! Privatization should be quick and complete, with restitution and deregulation as necessary preconditions. The outcome of the transition should be a radical separation of economy from politics; in other words, Serbia needs to become economically liberal political democracy. However, political parties are unwilling to effect this change. So the question remains – who will do it?

This website uses cookies to improve your experience while you navigate through the website. Out of these, the cookies that are categorized as necessary are stored on your browser as they are essential for the working of basic functionalities of the website. We also use third-party cookies that help us analyze and understand how you use this website. These cookies will be stored in your browser only with your consent. You also have the option to opt-out of these cookies. But opting out of some of these cookies may affect your browsing experience.
Necessary Always Enabled
Necessary cookies are absolutely essential for the website to function properly. These cookies ensure basic functionalities and security features of the website, anonymously.
Functional
Functional cookies help to perform certain functionalities like sharing the content of the website on social media platforms, collect feedbacks, and other third-party features.
Performance
Performance cookies are used to understand and analyze the key performance indexes of the website which helps in delivering a better user experience for the visitors.
Analytics
Analytical cookies are used to understand how visitors interact with the website. These cookies help provide information on metrics the number of visitors, bounce rate, traffic source, etc.
Advertisement
Advertisement cookies are used to provide visitors with relevant ads and marketing campaigns. These cookies track visitors across websites and collect information to provide customized ads.
Others
Other uncategorized cookies are those that are being analyzed and have not been classified into a category as yet.
SAVE & ACCEPT